In June, my studio hosted our first ever all online piano camp over Zoom. Even though at times it felt like we were reinventing the wheel, it turned out to be a great experience! Hosting an online piano camp has given me other ideas for piano workshops and classes that I can hold throughout the year. 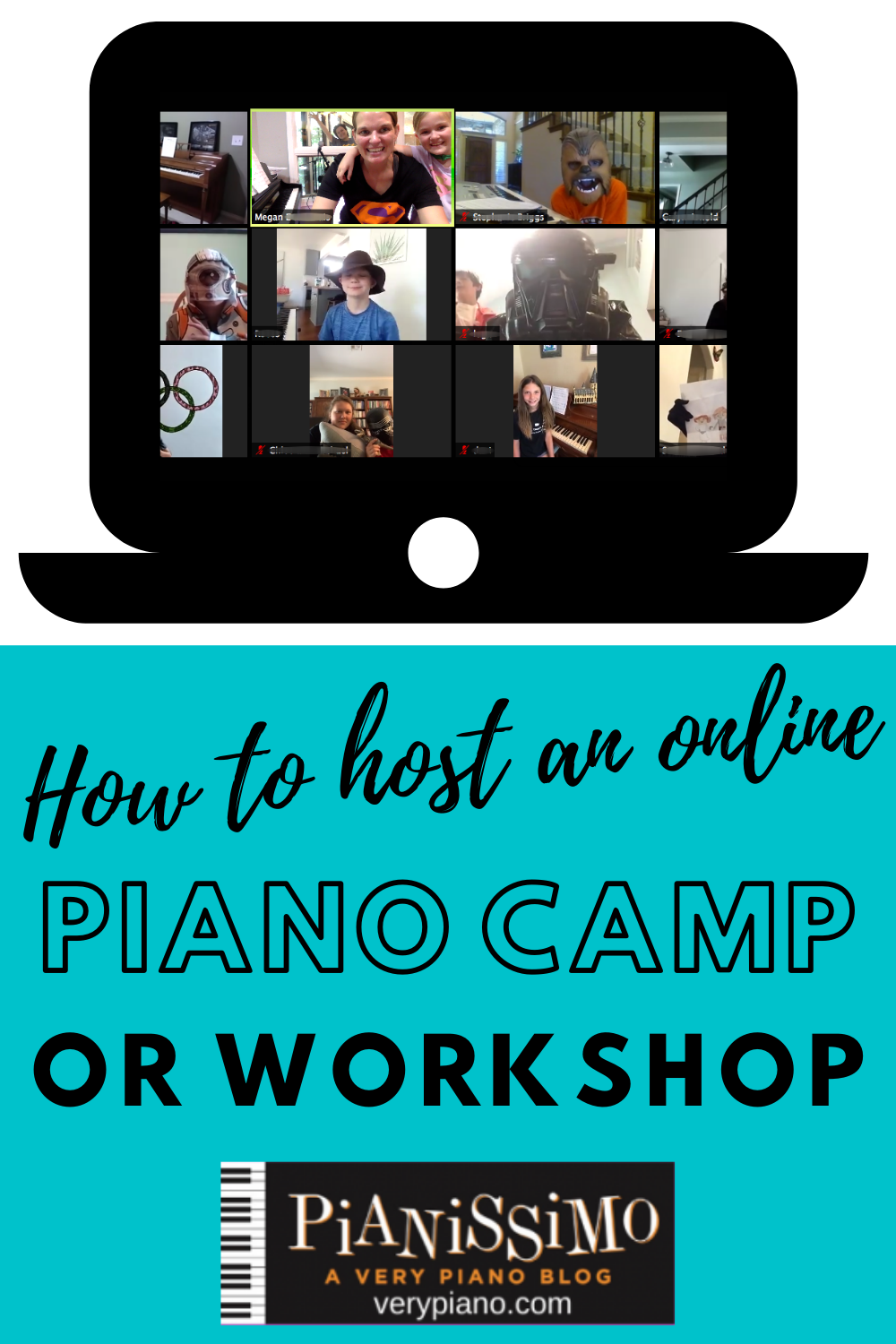 The theme of this year’s piano camp was John Williams Movie Music. We had 14 kids ranging from early elementary to high school.

This year’s piano camp was sponsored by musicnotes.com, who provided all of the John Williams piano arrangements for my students.

In normal summers, we have a couple of piano camps at the studio. There is usually one for beginners and another for kids who already play the piano.

The camps are always a highlight of the year. The kids love spending extra time together, we get to dig in deeper to parts of music that don’t always fit into our piano lessons and there are all kinds of extra fun activities to do as a group.

It was super disappointing that the pandemic was putting a damper on our usual piano camp plans. However, we had several students say that they were still interested in an online options.

I knew that an online piano camp couldn’t replicate our normal in-person experience, but we definitely made the best of these unusual circumstances.

I picked John Williams’ music as the theme for online piano camp because I knew that my students love so many of the movies that feature his music. It was a fun direction to go for some summer music.

The Goal Of Piano Camp

When I plan in-person camps, I always design them around an end goal. It’s usually a performance that will take place on the last day of the camp to show what we’ve learned. During the course of the camp, I make a big point to help the students feel the progression of starting from scratch to arriving at our goal. The final performance is usually a group endeavor that features a lot of ensemble playing. Every student contributes in many ways to the final performance.

My normal in-person camps usually meet for a few hours each day for one week, Monday through Friday. By Friday, the kids are ready to put on a little show for their parents.

For an online camp, it didn’t make sense to meet for several hours at time. I didn’t think the kids would last that long at a computer. Instead, we spread out piano camp to last 3 weeks. It was on Tuesdays and Thursdays for one hour each day.

We still made it our goal to put on a performance during the last day of piano camp. Each student picked a John Williams movie theme to perform on the piano over Zoom. They also had to include a creative element to make their performance feel a little more like the movie. For example, they could wear a costume of a character from the movie, draw a scene from the movie or have some props on the piano.

It wasn’t as obvious how to let the kids collaborate in the final performance so we focused on solo performances for this camp.

We held online piano camp on Zoom and used the breakout rooms to have the kids move between different classes during the hour. 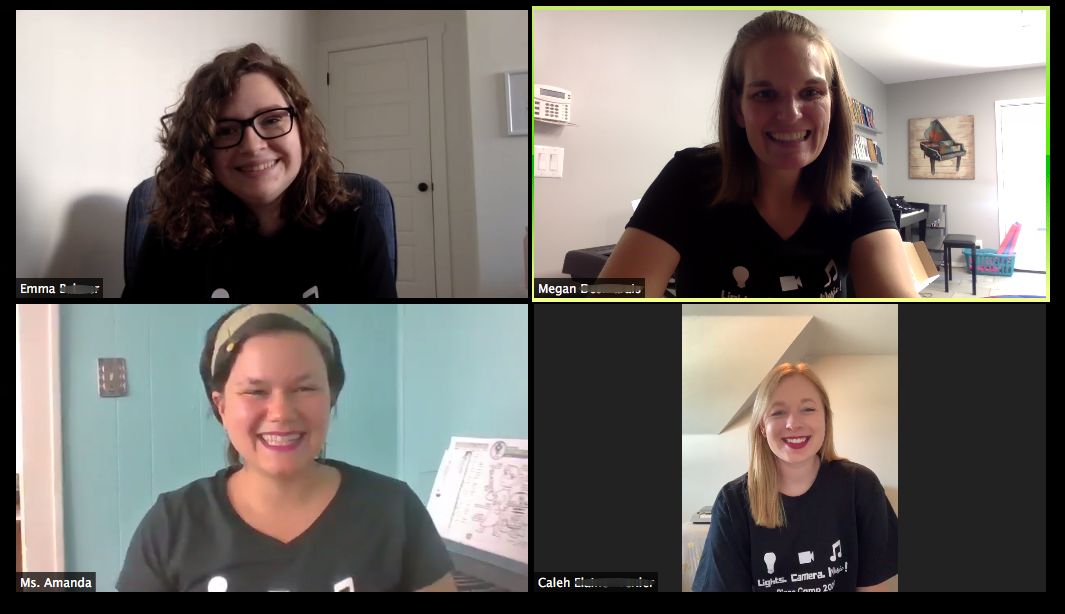 I couldn’t have pulled things off without the help of my assistant teachers. I had 3 teachers helping me and each one was in charge of teaching a certain topic – music appreciation, music theory and repertoire. I planned to be available to float between breakout rooms and fill in as needed.

I helped each teacher come up with activities that would work well over Zoom.

Since we were all far apart during the course of piano camp, I wanted to make sure some elements of in-person piano camp were present to unify the group.

I got busy with my Cricut machine and designed bags and t-shirts for each student.

I used these drawstring bags and gathered supplies for the kids to use during piano camp so that they would all have everything they needed at home.

Here’s what was in each bag: We all wore our camp t-shirts together on the first day. Keep reading to find out how we used all of the supplies in their bags.

What We Did In Piano Camp

I split our participants into three groups, roughly based on level/ability. In most sessions, each group rotated through the three breakout rooms with the assistant teachers.

In general, here are some things that we did in each room:

Since our goal was to learn music by John Williams, this was the part of the camp where students worked on learning their songs. This looked a little different for each of the groups. With the youngest groups, we actually taught them how to play the Star Wars Theme and the Superman Theme by rote over Zoom. However, the older groups had their own sheet music from musicnotes.com and were working more independently on their music.

The teacher in the Repertoire Room helped kids decide which song they wanted to learn. Then, sometimes she would mute all of the students and check in on one at a time. Other times she would demonstrate things for the group. Sometimes the kids would each show the group what they had learned so far from their song.

Since it’s hard to give individual attention over Zoom, piano camp also included some one-on-one time with a teacher outside of the camp time. The teacher in the Repertoire Room would take note of what she thought students might need help with. Then, the other 3 teachers and I made sure everyone got the help them needed during the three weeks.

Including these mini private lessons in the camp experience really helped things run more smoothing during the camp hours. We could more easily answer individual questions and we didn’t have to spend as much time with the group checking on the details of each song.

I wanted to be sure that piano camp would include some music theory to keep the kids thinking and learning during their camp experience.

The concepts we focused on were note recognition for the younger kids and chord building for the older students. Everyone had some rhythm activities sprinkled throughout the week.

We had a variety of activities in the Music Theory Room. Here are a few things we did:

The Music Appreciation Room was the icing on the cake! This was a really fun part of the camp where kids got to explore and learn about the role that music played in their favorite movies.

In this room they would watch video clips with and without the music to compare how the music affects the movie. They discovered some common elements that John Williams includes in many of his works and learned about music that influenced him.

This is the room where the Play-Doh and markers came out. The students did a lot of active listening activities where they would draw what they were hear or sculpt with their Play-Doh as they were listening.

While most days of piano camp had students rotating through these three rooms, the first day and last day were quite a bit different.

On the first day of piano camp, we mostly stayed together as a larger group and used the app Kahoot to play a John Williams name that tune game.

Kahoot is a really fun activity to do with a group on Zoom. Each student does need to have another device aside from the one they are using from Zoom. They use their second device to log in to the game and they use it as a controller to answer questions. They can see the questions from the teacher’s shared screen on Zoom, then in between each questions it shows how they measure up compared to the other students. For each question, I played short recordings of John Williams’ themes and the kids had to select which movie it was from.

This was a really fun way to introduce them to a lot of the music up front and to help them realize how much of John Williams’ they already knew about. We played it on the first day of piano camp and again on the second to last day so the kids could see how much music they learned about over the three weeks.

The last day of piano camp was our big performance. We stayed as a big group that day and each student took a turn performing their song that included their creative element. Parents were invited to watch the other performances with their kids.

We kept things fairly casual for a performance and it was a really fun ending to our piano camp experience. Here’s what the kids performed:

Online Piano Camp turned out to be a great experience for all of us. There’s definitely a learning curve to online group teaching, but it was worth it to maintain our studio community and to bring some fun music activities to so many of our studio families.

It also helped me see the possibilities for other online piano workshops and activities. It was helpful to get behind the wheel on Zoom and to learn how to use all of it’s features.

A special thanks to musicnotes.com for sponsoring our online piano camp!

Other Articles You May Enjoy:

Previous Post: « Playing The Piano With Ease: How To Avoid Injury and Discomfort
Next Post: How to Conquer Stage Fright and Performance Anxiety for Pianists »