A common first question from new piano students is, “What do the pedals do?” The sustain pedal, also called the damper pedal,  is the pedal you will use the most at the piano.  Get comfortable with this pedal since it can be applied to most of your playing!

The sustain pedal allows the pianist to create a fluid and connected sound while moving their hands up and down the keyboard. Without this pedal the music would sound disconnected and choppy. Other instrumentalists  can use their bow or breath to keep their sound connected, while pianists use the sustain pedal.

An often overlooked element that the sustain pedal offers is harmonious overtones to sound. For example, when you play a low C with the sustain pedal, all of the pitches pictured below will also vibrate. These pitches may be difficult to detect, but they are what give the piano a full, resonant sound.

Learning to play with the sustain pedal requires coordinating  attention between your hands and foot. It will be awkward at first, just like learning right and left hands together at the piano, but with practice it will come. Try thinking of it as choreography. Slowly plan the timing of each movement of the foot and the hands until it becomes one fluid motion.

There are two ways that a sustain pedal could be marked in your music although some sheet music does not indicate when the sustain pedal should be used. 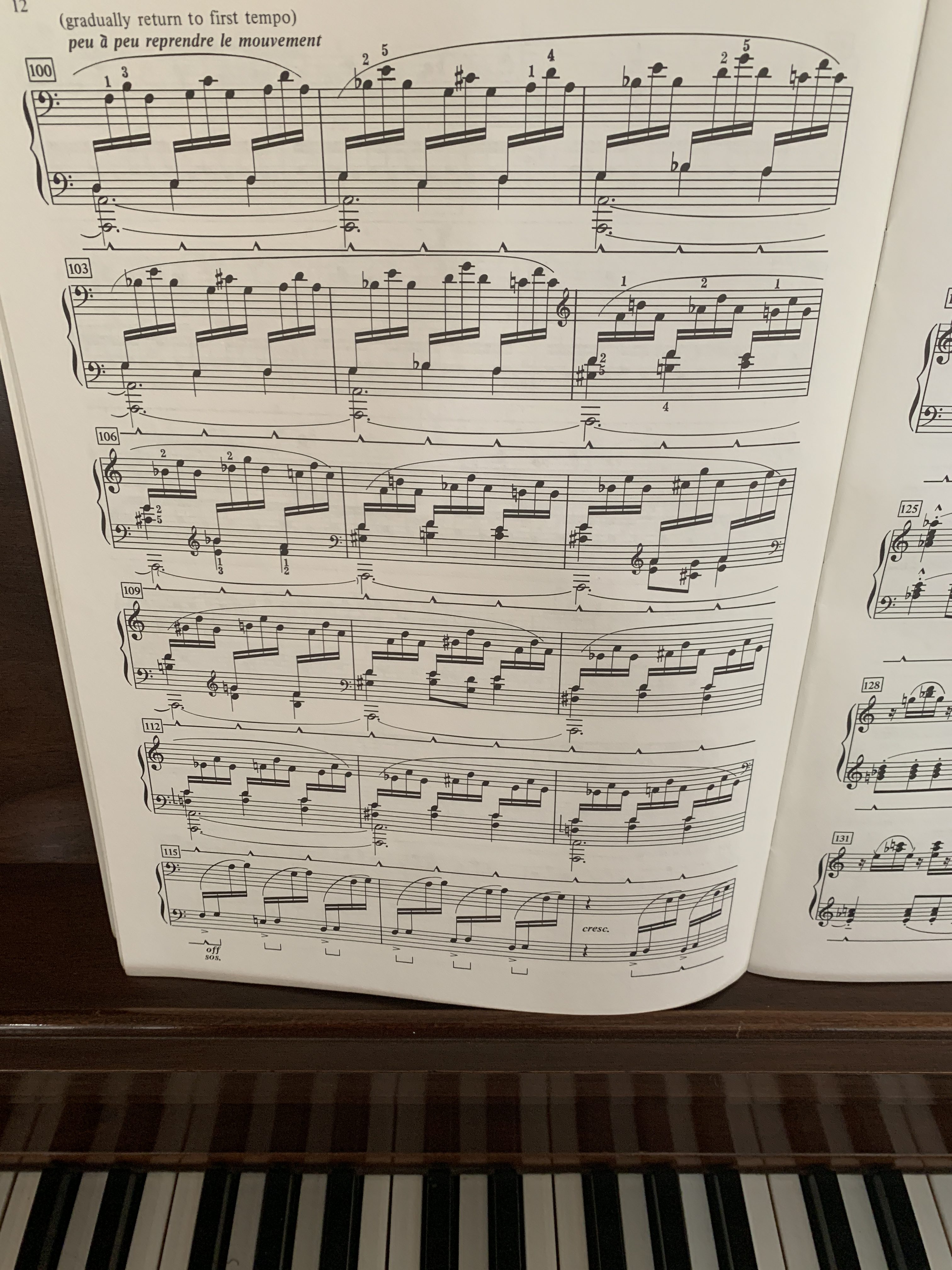 In some advanced piano music a piece may say “con pedale” meaning “play with the pedal.” This is where the overlapping pedaling technique also comes in. It becomes very natural with practice. The soft pedal, also called the una corda pedal,  is on the left side. This pedal creates a softer tone.

For every piano key you play the hammer strikes up to three strings for each given pitch. When you depress the soft pedal  the keys and hammers shift slightly allowing the hammer to reach only one or two strings. Fewer strings vibrating means less sound.

Una Corda means “one string.” Piano strings used to be a bit further apart, so when the soft pedal was depressed the hammer only touched one string. Modern piano strings have less space often causing the hammer to strike two strings.

Soft pedal is indicated in the music with una corda. The marking tre corda (literally meaning 3 strings), is your cue to release the soft pedal.

Even if soft pedal isn’t marked in your music you may use it when you need less sound, such as when you are accompanying. It is also useful when you would like to broaden the range of the piano and pianissimo dynamics. For example, let’s look at measure 15 of “Claire de Lune” by Claude Debussy. The octave low E flats that begins the measure move quickly to chords in the treble clef.  Using the sostenuto pedal while playing the low E flats allows them to sound to the end of the measure while the left hand plays the chords higher on the piano. The sustain pedal would keep the sound connected when transitioning, and the low E flats would continue to resonate.

The sostenuto pedal is not one you will use very often. There is a lot of repertoire that was written before this pedal was popularized by Steinway in the late 1800’s. In music the sostenuto pedal is often abbreviated to “sos.” or “S.P.”, or maybe not marked at all. You will know if it’s appropriate to use the sostenuto pedal when your left hand must sustain a low chord below middle C while moving quickly away, or concurrently playing another voice you do not want sustained.

Another use for the middle pedal is a practice pedal. This would not be marked in your music, or used for performance purposes. It allows the pianist to the practice with less volume by acting as a mute. This pedal does not have to be continually depressed since it locks into place.  When in place a piece of felt falls between the hammers, and keys causing much less vibration of the strings.

When using these pedals you need to sit far enough from the piano, so that your legs extend out to reach the pedal while also keeping your heels on the ground for support.  You are too close if your legs form a 90-degree angle at your knee.  This angle requires a  large range of ankle mobility, and makes moving the pedals more difficult.

It can be easy to use the sustain pedal to cover up and drown out mistakes. Do not get in the habit of unconsciously using the sustain pedal. It can make your sound be connected and resonant when used well, or messy and murky when used poorly.

Now that you know what each pedal does, and how to use them you are ready to explore how they can enhance your piano playing!

Other Articles You May Enjoy